This book provides an account of significant political developments in a small West African country, The Gambia, about which such information is not readily available. It is a robustly written account of the very fluid politics of The Gambia over the last ten years since the coup that ousted President Dawda Jawara. The author is able to bring an enviable amount of first-hand understanding to the case at hand. He was a newspaper editor in The Gambia and also a correspondent there for the BBC. The book addresses a subject of much current interest in the wider development and policy-related literatures and much of the information makes an original contribution to knowledge in the area of democracy and military rule in The Gambia. The study thus constitutes an original contribution to the growing scholarship on The Gambia. It also makes a contribution to the existing literature on democratisation and the military in West Africa.

The book undertakes the much needed research into recent political developments in The Gambia, and sets this in the wider context of West African politics. It provides an in-depth study of events in The Gambia prior to and post 1994 and examines The Gambian case in a theoretical context pertaining to Africa in general, and the West African sub-region in particular.

The fundamental concern of this book is to determine whether it is possible for a nation to democratise under 'military' rule. Following the 1994 coup d'etat, The Gambia had military rule until 1997. After two Presidential elections, it remained under 'quasi-military' rule, the military having merely been thinly disguised in civilian clothes. The central argument of this book is that in the case of The Gambia, it has not been possible to democratise under either 'military' or 'quasi-military' rule. The country is far from being democratic and the democratisation process has barely begun. The Gambia operates under an authoritarian regime with strong military overtones.

The 1994 coup d'etat in The Gambia took place at a time when most of Africa was moving towards democratisation. At the same time, The Gambia moved away from democratisation and into military dictatorship. This Gambian 'exceptionalism' in recent regional, continental and global political development is explained and analysed in the book. The study presents a conceptual and empirical analysis of the recent 'democratisation' processes under the military and military-turned civilian regimes in The Gambia. It uses conceptual or analytical insights, drawn from the general literature on military regimes in Africa, to inform understanding of the case study. The book raises a number of very pertinent questions concerning the place of the military in a modern African polity, and the varied contexts and contested nature of this role.

The book sets out to assess the military regime that seized power in The Gambia in July 1994, and which remains in power to the present day - having formally converted itself into an "elected" civilian regime through managed elections from which the military leader emerged victorious.

It is broadly concerned with four themes: a) pre-independent politics in The Gambia, the Jawara years and the causes of his overthrow; b) the coup d'etat that brought the military regime to power on 22 July 1994; c) the subsequent conduct of the military regime, with particular concern for its attempt to legitimise itself through elections; and d) the question of whether The Gambia can be regarded as a democracy, to which the author has returned a decided negative.

Four main questions are posed. What were the causes of the military coup in The Gambia? What were the various phases of military rule? How has the military performed in office? Has The Gambia returned to a functioning democratic state following the 1996 and 2001 elections? The findings indicate that the military intervention was prompted by a combination of political, economic and social problems in the country. The 1994 coup d'etat in The Gambia is best seen as the outcome of two main variables: the societal/economic/political factors which made military intervention a possibility, set against the motivations of junior officers of the Gambia National Army to intervene in the government of The Gambia because of their own dissatisfactions and possible personal aspirations. Direct military rule was in two phases and the military's leadership performance was poor in respect of human and civil rights in both phases, although there were some modest gains in socio-economic terms. Despite the holding of elections, The Gambia remains undemocratic.

The study is based on newspaper reports, interviews and the author's own experiences as a journalist in The Gambia until his departure from the country in 1996, together with published sources. The empirical element in the book is accompanied by a survey of literature in the field, notably relating to military regimes in general, and especially in Africa. The treatment of empirical developments and academic sources in the book is both descriptive and conceptual.

The ten chapters (including a general conclusion) which make up the book are logically structured; general aims and objectives, which are clearly identified in the introductory chapter, are pursued in a sustained way in the subsequent discussion. Early presentations of approach, objectives and strategy combine with overviews of pre-1994 politics and economics in the opening two chapters. Along with the summary of the circumstances surrounding the military's intervention in politics in 1994 (Chapter 3), these serve as a prelude to the detailed evaluation of the military's performance in government; and the circumstances, processes and consequences of the army's transformation into a "democratic" civilian (in reality a "quasi-military") regime, which constitutes the middle third, and core, of the book.

The final third of the book focuses on the fortunes of both democracy and politics under a quasi-military regime, and tries to draw lessons from this experience for a serious consideration of the role of the military in democratic politics. The penultimate chapter offers recommendations for deterring future coups in The Gambia and elsewhere in Africa, while a general conclusion present a cogent summary of the principal findings and conclusions. 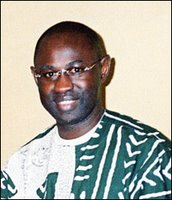 Dr Ebrima Jogomai Ceesay was born in The Gambia on 4th April 1966, where he was a prominent Journalist working for the Daily Observer, one of the most important newspapers operating in The Gambia during the period of military rule there. In his roles as the Editor of the Daily Observer newspaper and also as the BBC correspondent in The Gambia, from 1994 to 1996, Dr Ceesay spearheaded a strong opposition to the military regime in The Gambia for two years and more. However, after several threats on his life, he moved to the United Kingdom in late 1996, where he now calls "my second home." Dr Ceesay is a naturalised British citizen.

In 2001, Mr Ceesay achieved a Master of Philosophy (MPhil) Degree in African Studies and then went on to complete his PhD in Political Science and Development Studies in October 2004. He studied at the University of Birmingham's prestigious Centre of West African Studies. He is acknowledged as "an expert on Gambian matters" in the UK and further afield.

He has, since 1994, been an ardent protagonist of democracy in West Africa and he has remained fervent and committed to the cause of re-establishing full democracy in The Gambia. Mr Ceesay has been vociferous in his opposition to the military government in the Gambia, and a fierce critic of the human rights abuses which characterise Gambian politics and everyday life. He has continued to be active in political debates about the future of the Gambia since he left that country in 1996, not least through his articles on the Internet.

The academic literature on The Gambia has once more been greatly enriched by the recent publication of Ebrima Ceesay's book, The Military and Democratization in The Gambia: 1994-2003, following the recent publication of Arnold Hughes and David Perfect's, A Political History of The Gambia, 1916-1994. Ceesay's book takes off precisely where the latter ends to capture major political developments in The Gambia from the coup in 1994 to 2003.

The Military and Democratization in The Gambia is a lucid and well-written book that contributes not only to the literature on The Gambia but also the large Democratic Transitions literature spearheaded by various "democratization" attempts inAfrica and elsewhere in the 1990s and earlier. Thus, the book straddles two important academic literatures to account for the causes and aftermath of democratic experiments of this period and The Gambia's, specifically.

The first chapter lays out the basic arguments and foundation of the book as well as the chapters that follow. Chapter two is an important historical backdrop to pre and post-independence politics of the Gambia, while chapter three focuses on the historic 1994 coup that ousted Sir Dawda Jawara, Gambia's founding president. Chapter four analyzes the period under military rule (1994-1996), followed by an excellent discussion of the transition program (1994-1996) back to "civilian" rule in chapter five. In the sixth and concluding chapter, Ceesay, with great skill assesses the "democratic" credentials of the APRC regime. He does this with remarkable objectivity even following his strained relationship with the military authorities in The Gambia, which ultimately forced him into exile.

The Military and Democratization in The Gambia: 1994-2003, is a timely addition, by a young Gambian who already made his mark, first, as a journalist prior to leaving The Gambia. Undoubtedly, it will remain, for years to come, a definitive contribution to the growing scholarly literatures on The Gambia, specifically, and democratic transitions, generally.

Finally, the recent publication of Ceesay's book as well as Hughes and Perfect's are a tremendous boon to Gambian Studies and a fitting tribute to the University of Birmingham, its Centre for West African Studies, and Arnold Hughes, who served as the latter's director for several years.

As director, Hughes supervised the dissertations of Perfect, Ceesay, Fatma Denton and many other Gambians. The Gambia , Gambians and Gambian Studies owe much to him, British and other non-Gambian scholars, particularly the late John Wiseman, for their interest in this once improbable mini-state and their scholarly contributions.

While Hughes is now retired and still active academically, he nonetheless, leaves two legacies: first his scholarly contribution to Gambian and African Studies, and second, and perhaps most important, a cadre of young Gambian scholars to continue his and the Centre's tradition of academic excellence.

For Young and older Gambians alike, The Military and Democratization in The Gambia: 1994-2003, is a must read. While the book stands solidly on its own merits, A Political History of The Gambia; 1816-1994, sets the context to understand and better appreciate the former. I encourage you to buy and read both.